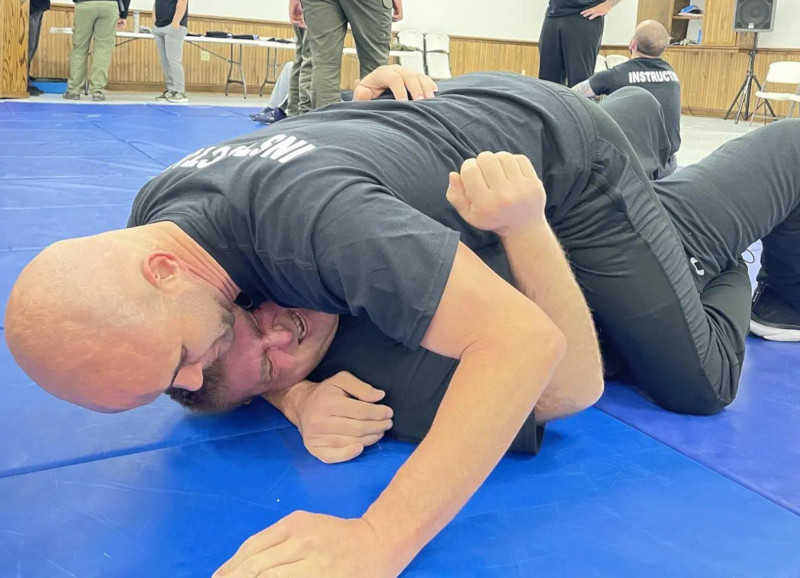 The media has provided much recent coverage concerning law enforcement officer misconduct and use of force violations. The 2020 George Floyd incident in Philadelphia is certainly the most highly publicized occurrence in recent memory. The consequence of this led to public demonstrations, violent protests, and extreme political upheaval across America. Unfortunately, such incidents cause not only the public but also publicly elected officials to apply blanket blame on all law enforcement due to the actions of a few.

How can Jiu-Jitsu help?

Training deficiencies appear to be at the heart of the issue in many incidents involving excessive use of force. Not just the training methods but also the curriculum, methodology, and training time allotted for what trainers teach law enforcement personnel. Some attribute excessive use of force to a lack of ability or tools to subdue and apprehend a subject. As Abraham Maslow once said, "If the only tool you have is a hammer, you tend to see every problem as a nail." Fortunately, Jiu-Jitsu provides more tools for a law enforcement officer and levels the playing field in many regards. The founders of the art taught in Brazil emphasized the importance of leverage and skill in technique in their teaching. Helio Gracie's vision for Jiu-Jitsu embodies everything a law enforcement officer needs to be successful. That is, one should not have to rely upon strength and size to survive and win in an altercation and should "always assume that your opponent is going to be bigger, stronger and faster than you; so that you learn to rely on technique, timing, and leverage rather than brute strength."

"Jiu-Jitsu is for the protection of the individual: the older man, the weak, the child, the lady, and the young woman; anyone who doesn't have the physical attributes to defend themselves." - Hello Gracie.

Many law enforcement agencies are moving in the direction of providing training in-house to their recruits and active law enforcement personnel or establishing partnerships with local Jiu-Jitsu schools. The Marietta Police Department in Georgia is one such agency in which this has occurred. Their efforts stem from a 2019 incident heavily covered in the media, where officers used striking to subdue and apprehend a resisting suspect. Since then, the Marietta Police Department has instituted a Jiu-Jitsu-based program of study for their officers that has reduced injuries and increased the safety of both their officers and suspects during apprehension.

Most martial arts teach the practitioner to kick and punch their opponent, which is unrealistic for use in law enforcement use cases. Using striking tactics to subdue a resisting suspect leads to a high probability of use of force violations just by the nature of the engagement. Blunt force trauma to soft tissue and vital areas caused by a law enforcement officer can only lead to a potential for increased harm to either the suspect or the officer and an increase in liability resulting in punitive action and loss of workforce over the long term.

In comparison, by practicing Jiu-Jitsu, many police officers will be able to non-violently level the playing field by an increased ability to subdue and handcuff a resisting suspect effectively. Regardless of the practitioner's size, Jiu-Jitsu is about using leverage, timing, and proper body mechanics in controlling an opponent by applying basic leverage principles. Some would argue that suspects would not have a chance with this shift in tactics, and allegations of excessive force would substantially decrease.

Despite the obvious physical demands of law enforcement, many officers struggle to work out and maintain an optimal fitness level for their duties. An aspect of Jiu-Jitsu that makes it so unique is that, in addition to learning effective techniques for controlling another person, the practitioner invariably gains increased strength and cardiovascular fitness from a vigorous full-body workout. As practitioners become increasingly more skilled, they will begin to spar in live sessions with one another where there is increasing resistance between them. These live sessions organically create a positive impact on stamina, strength, and cardiovascular fitness. Adding Jiu-Jitsu to the training regime for law enforcement personnel will generate the same for them. Increased fitness will also mean increased overall health and wellness, which will have an undeniable positive impact on an agency's workforce.

According to the American Psychological Association, resilience is "the process and outcome of successfully adapting to difficult or challenging life experiences, especially through mental, emotional, and behavioral flexibility and adjustment to external and internal demands." There is arguably no other civilian profession with the stress and potential danger the average law enforcement officer faces almost daily. Jiu-Jitsu provides a vehicle to prepare a practitioner to overcome mental and physical adversity and generate the flexibility required to successfully navigate recovery from stress, trauma, and extreme emotional events. Jiu-Jitsu forces a person to learn to be comfortable in uncomfortable situations and to apply strategies to respond calmly with reflexive non-violent techniques instead of a violent application of force. As the officer continues in his practice of Jiu-Jitsu, he will become more self-confident in his skills and ability to successfully apply techniques to subdue suspects without escalating to greater use of force.

Post Traumatic Stress Disorder (PTSD) can harm law enforcement personnel. Another benefit of Jiu-Jitsu is its ability for practitioners to generate calm in an environment of chaos. Some consider it a form of moving meditation, and it is known to increase one's ability to maintain a higher level of mindfulness. Remaining in the moment is a must when practicing Jiu-Jitsu. The valuable therapeutic mental benefit is that it will quickly become a stress-relieving outlet for law enforcement officers during their practice. Their practice will increase their ability to deal with stress and mitigate the effects of PTSD.

Most agencies have at least one Jiu-Jitsu school within their jurisdictions. Identify schools within the area that are willing to establish partnerships. Many of these school owners are eager to provide reduced tuition rates and additional opportunities for law enforcement personnel to receive additional training outside of work.

Some agencies have been successful in partnering with a local Jiu-Jitsu academy and budgeting to reimburse the school monthly at a per-visit rate. This public partnership option allows agencies to work with experienced trainers and employees to train independently at a minimal cost to their agencies.

Blessed are the peacemakers: for they shall be called the children of God. Matthew 5:9